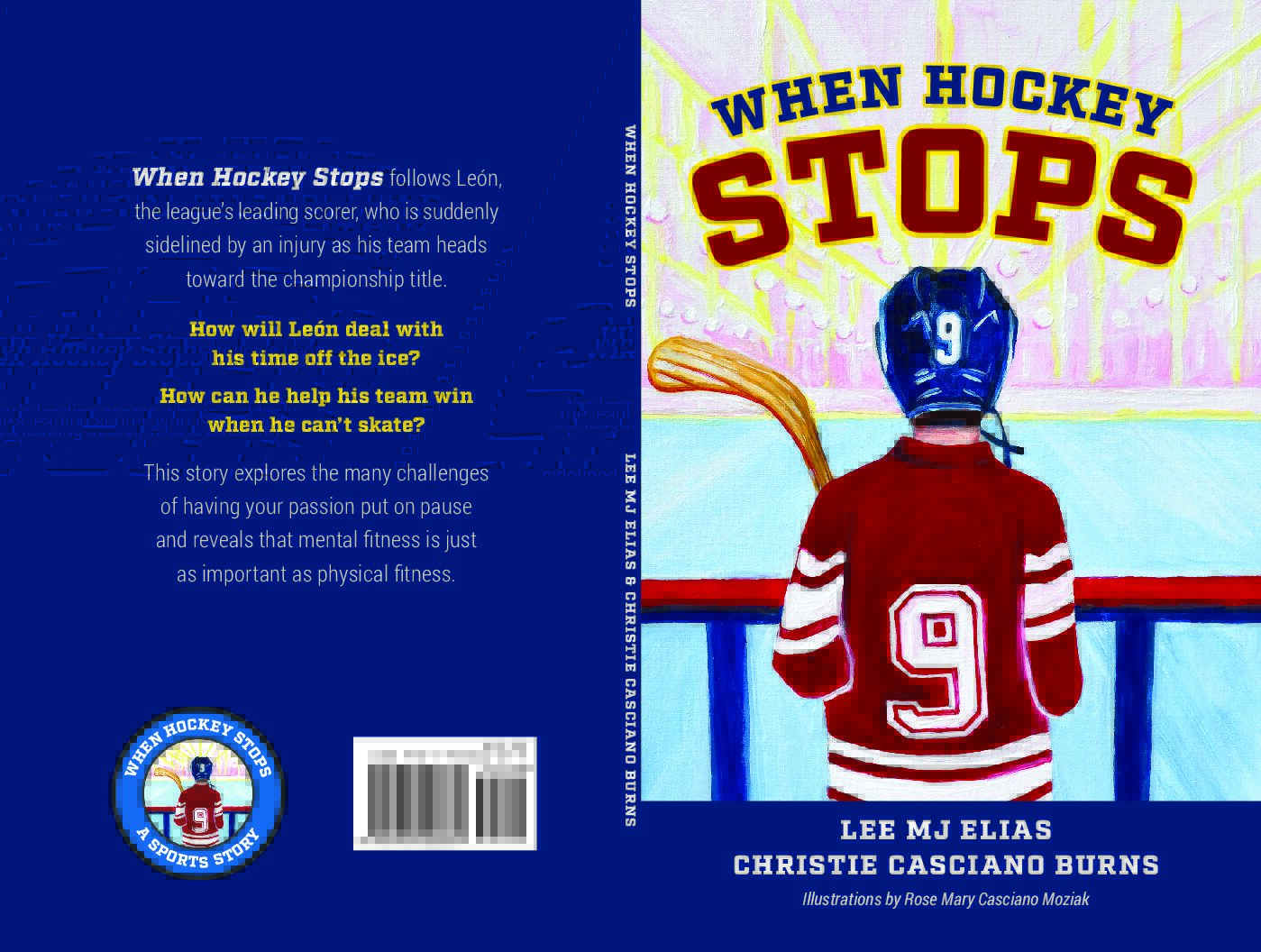 In March of 2020 the world, as we knew it, changed. And changed dramatically.

In the sports world, looking at hockey in particular, that sport stopped for everyone from the National Hockey League down to the grassroots level of the game.

Adults quickly shifted focus towards finding a way to face the new reality in life. Hockey players of all kinds lost the ability to play the game they love.

It begged the question, “what do you do when hockey stops?”

“While we had to figure out ways to adapt and survive as parents, for our kids, there was no guide or drill-book on how to manage the physical and mental side effects of having the game they are most passionate about taken away,” said Casciano Burns.

“That’s where the idea came from,” continued Elias. “Let’s write a children’s story about how to face the unexpected adversity that life can provide.”

And thus the book, “When Hockey Stops” was born. The book targets young readers, 6-12 years of age, and explores the challenge of being sidelined from something you’re truly passionate about and reveals that mental strength is just as important as physical strength.

The story follows Leon, a top hockey player who is leading his team toward a championship season. But during a big game Leon is slammed into the boards by a player from the opposing team, leaving him injured and unable to play.

Throughout the story, Leon must deal with his emotions as well as find out new ways to help his team win.

“Leon’s character is actually based on my son, Logan,” explained Elias. “He went through the same type of situation in his first year of mite hockey.

“I even remember getting hurt, getting a tear in my shoulder playing hockey and being out of action when I was 17. I remember it well.

“That’s when I learned that I could do other things to stay involved with the game while I was healing. I did go on to play hockey for several more years after that.

“But it helped keep me involved in the game to this day.”

“My son broke his wrist and missed hockey as well,” added Casciano Burns. “So we both had experienced what is in the book.

“And all of the characters in the book are based on real people that we both know. So we had a lot to draw from.”

Elias talked about the importance of the book for this generation of hockey players.

“Hockey provides all of us with a lot of life lessons, no matter the year,” remarked Elias. “COVID was no different.

“Like most things, it’s not what happens to you in life that defines you, but how you respond. Our goal was to create a guide through the story that would inspire young athletes to be resilient and mentally tough in the face of adversity.

“Although we based this book around hockey, we both feel that you could use this book in any sport. All other sports stopped for awhile when COVID hit.

“And children do get hurt in other sports and have to stop playing for awhile. So we’re hoping to touch more than just those involved in hockey.”

In addition to writing the book, Christie and Lee have also been speaking to local elementary schools about the importance of mental fitness.

“Not only is it fun to speak with the kids, but it’s a privilege to help the next generation,” stated Casciano Burns. “That is the best part.”

The book has already received high praise from fellow hockey regulars and former NHL players including Ryan Whitney, Rick Nash and Danny Briere, among others.

“We are incredibly flattered and humbled by the support this book is getting,” continued Casciano Burns. “It makes the entire process that much more enjoyable.”

There will be a “When Hockey Stops” book signing this Saturday, April 2 at 11 a.m. at the Barnes and Noble in Dewitt.  Participants will get to meet the authors, along with Syracuse University alum and former professional basketball star, Eric Devendorf, who will be lending an assist to celebrate youth sports.

Maryna Kobchuk’s Amazing Story On Her Journey To the Buffalo Beauts...